“Don’t you see that the whole aim of Newspeak is to narrow the range of thought? In the end we shall make thoughtcrime literally impossible, because there will be no words in which to express it.”

Not long ago, those active in the SEO space may have noticed I got into a bit of a Twitter spat with a couple of Google employees. In fact, it got downright testy.

Working as a paid Google spokesperson can’t be an easy job some days.

It all started when I questioned the ethical and anti-competitive concerns of Google ranking its own properties highly for terms like “SEO” and “robots.txt” (areas I have an interest in) but expanded to include other controversial areas, such as Google ranking itself highly for Google Flights, YouTube videos, People Also Ask boxes, and other Google features hardcoded into the top of results.

The anti-competitive concerns of Google favoring its own properties in search results is a well-known problem, with governments around the world conducting investigations and working on new legislation to address these and other antitrust issues.

But to the Googlers, it was as if I was speaking another language.

One Googler called my concerns “absurd,” while another indirectly called them “stupid” and “baseless.”

This led to the question:*how can folks with whom I generally respect have reached such a significant gap in thinking?*Why is something so obviously concerning to the rest of the world—Google positioning its own properties highly in search results—such a non-issue to Googlers themselves?

The answer, it turned out, is Googlespeak™.

In searching for the truth, I fell down a rabbit hole of corporate culture and communication policy. I learned that Google institutionalizes a way of limiting communication about certain concepts among its employees that makes even thinking about anti-competitive issues incredibly difficult.

And when employees have trouble thinking about it, it starts to shape their reality.

While this policy doesn’t have an official name, I labeled the practice Googlespeak™, like something out of George Orwell’s dystopian novel 1984, to which it bears a striking similarity.

If you’ve used Google over the past ten years, you probably noticed something obvious: there are fewer and fewer actual websites in Google search results.

Try searching for a hotel, and you’ll enter a walled garden of Google-owned results that proves harder to exit than the cleverest of escape rooms. You can click photos, reviews, check availability, and more – all without leaving the comfort of Google.

And with ads nearly indistinguishable from regular results, Google’s monetization of this walled garden becomes even murkier.

A recent study by The Markup found that Google devotes a whopping 41% of first-page search results to its own propertiesalong with Google’s Direct Answers, which are known to keep users on Google longer and lead to a drop in users visiting external websites.

Google is able to build entire curated web pages with 3rd party content. What was once a list of links to websites has been reduced to footnotes and mere citations. By adding more Google features, including those meant to answer users’ questions directly—often by scraping information directly from the sites they reference—visitors have fewer incentives to actually visit other websites, and far more barriers if they wish to do so.

The results of these actions on other businesses have real-world consequences.

Hipmunk, the innovative and fan-favorite flight search engine, shut down in part because of Google’s promotion of its own Google Flights and shifting away from “free” search results to paid ads, making it harder to compete.

It’s difficult to imagine any new flight search, no matter how innovative, winning today with Google acting as the web’s gatekeeper.

This is only one of a 1000 such examples of Google potentially limiting access and innovation by keeping the top of results to itself.

Favoring itself in search results isn’t the only thing regulators around the world are looking into. Google’s growing antitrust concerns include:

Finally, President Biden has appointed the most antitrust savvy team any presidential administration has seen in years.

Yes, bigger and more impactful antitrust pain for Google is certainly on the way.

In George Orwell’s dystopian classic 1984, he introduced the concept of Newspeak – a language of “simplified grammar and restricted vocabulary designed to limit the individual’s ability to think and articulate” about taboo or undesirable topics.

Orwell observed that when you limit a person’s language, you can successfully limit their thoughts.

As it turns out, in order to turn a blind eye against growing antitrust concerns, Google has codified its own version of Newspeak and made it official company policy.

In documents obtained by The Markup, Google makes it obvious that certain words are taboo in both internal and external communication.

The intent of these guidelines couldn’t be more obvious. One document, titled “Five Rules of Thumb for Written Communication,” spells it out clearly.

Here’s one such passage, advising Googler’s about certain words that aren’t acceptable and explaining how market expansion can be framed as “helping users.”

Another training document titled “Communicating Safely” is even more explicit in defining bad words that Googler’s must avoid at all cost and good words to substitute in their place.

For example, under no circumstances are Googlers to talk about “Market Share.” Those are bad words not to be used.

Instead, Googlers should use a good word such as “Industry” or “Space” as a substitute. Other slides emphasize how even “competitor” is a bad word.

Indeed, the whole concept of beating the competition isn’t allowed to exist in Googlespeak™, although that is exactly what they do.

Instead of beating or getting ahead of competitors, Googlers are simply to communicate the approved concept of “Improving our product/service.” Generally, whenever Google does anything that might harm competitors, the standard responses typically include “we simply improved our services” or “it’s good for users.”

In a hypothetical world, it would also be good for users if Netflix were to let its customers watch pirated movies for free, or if Amazon gave away free Kindle editions of every book in its catalog. While these actions might be—at least temporarily—good for users, they would simultaneously be devastating to the writers and artists producing these works, as well as any competitors.

And while there are many other areas of Googlespeak™ not covered here, one of the most important is that Google is in no way a monopoly.

In fact, from Google’s point of view, it is nearly impossible for them even to become a monopoly because their self-defined competition is “every company that lets users access information and every company that sells advertising.”

Using this leap of lawyer logic, Google effectively claims that because their dominance allows them to compete in so many markets, they can’t be considered a monopoly until they win all of them.

Of course, these statements belie the reality of Google’s 92% search engine market share, as well as their near-complete stranglehold on online display advertising.

To paraphrase Yeats, “that center ain’t going to hold.”

The real-world impact of Googlespeak™ has proven effective over and over again.

So pervasive is it in company policy that when US Congressional lawmakers asked Google to provide market share data, Google responded that Google simply “doesn’t maintain information in the normal course of business.”

It’s incredible that one of the largest, most successful companies in the world doesn’t maintain data on its market share simply because they don’t want “market share” to exist.

If they don’t study or talk about it, it must not be real, right?

A report by the New York Times shows how while Google’s culture is one where employees are free to talk about anything, antitrust itself is a frowned-upon topic.

“All of this has contributed to an unspoken understanding among Google employees that it is not wise to address the antitrust issues openly, said six current and former employees, who declined to be identified because they either were not permitted to talk publicly or feared retaliation.”

The SEO community witnessed the effect of Googlespeak™ last year when Rand Fishkin (a friend and occasional collaborator) published a study showing the rise of Zero-Click Searches – Google searches that don’t result in a click to an external website.

The new data showed that overall, nearly 65% of Google searches don’t result in a click, a significant rise over previous years as Google adds more and more Google-centric features to its search results. 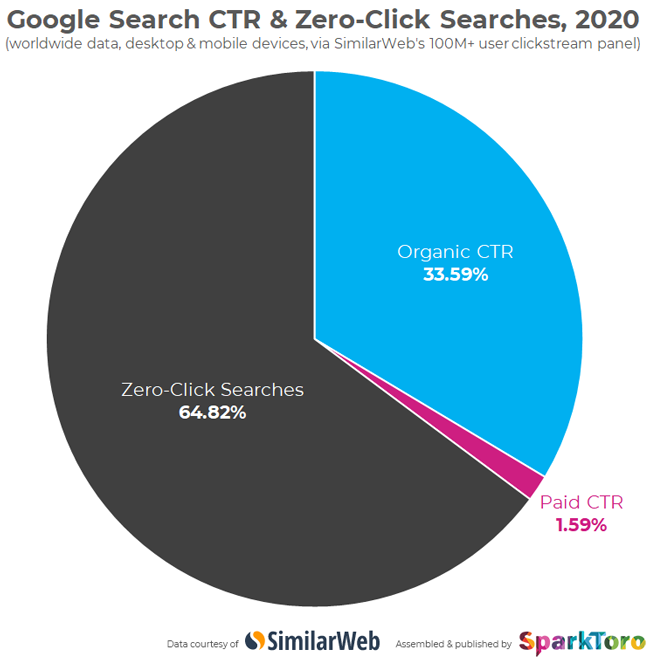 This data was so upsetting to Google’s worldview and threatening to their regulatory positioning that they quickly issued a response of the study, accusing it of using a “flawed methodology” (without explaining how) and refuted Fishkin’s claim without providing any actual data.

In other words, Googlespeak™ gaslighted the study.

Google also employs 100s of lawyers, lobbyists, and PR professionals around the world to help influence the message. In the US alone, Google regularly spends between 7 and upwards of 22 million dollars annually on lobbying efforts, making it one of the larger corporate spenders.

They also spend millions on feel-good advertising to get us, all of us, communicating and thinking on the same page.

The result is that Googlespeak™ leaks into our everyday language. I’ve even been surprised to hear some of my colleagues in the SEO space repeat many of these phrases.

Google certainly isn’t the only company with internal communication guidelines. Most major companies have something similar. But because of the sheer size of Google’s reach, fewer guidelines have shaped so much thought, both within the company and outside it.

And thus, I had arrived at the answer to my question: how could Googlers and I see something fundamentally so simple through completely different lenses?

The answer is because, in Google’s world, monopolies don’t actually exist, market share is an illusion, they certainly don’t beat competitors, and they only make things better for users.

While the rest of us live in another world altogether: a world where Google is clearly a monopoly in many areas, they absolutely dominate their market share, and they most certainly crush many of their competitors – including some of the very websites they gather data from.

What Happens If The Party Comes Crashing Down?

With all the new antitrust action knocking on Google’s door and shifting political opinions against once infallible tech giants, change is sure to happen. Any impending antitrust action, unlike actions of the past, has the potential to fundamentally change the way Google does business.

What happens to Googlespeak™ when antitrust comes crashing through the wall like the Kool-Aid Man on steroids?

Will Googlers feel lied to? Or will they double down and instead choose to believe that the antitrust actions are fake news based on bad faith information?

We may soon find out.